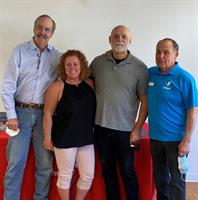 It was Doug Herder's second day on the job at the Simi Valley Family YMCA. He had just arrived to work when he suddenly lost consciousness and fell to the floor. He was without a pulse, wasn't breathing and his eyes were fixed and dilated. Because of quick action by YMCA staff and a YMCA member who immediately administered CPR, Herder survived. All those involved in Herder's emergency care including first responders and Adventist Health Simi Valley nurses and staff were honored during a November 30 celebration of life at the YMCA.

"This is a special day for us at the Y," says Ronnie Stone, the Southeast Ventura County YMCA CEO. "It's a day of celebration--to celebrate the citizen responders, emergency responders and staff at Adventist Health who all came together to save Doug’s life."

The day was also a reminder to the public to become CPR and AED-trained. "Properly applying chest compressions can give the individual the extra minutes needed until EMTs arrive," says Joe Williams, Engineer Battalion Chief with the Ventura County Fire Department. "The chain of survival involves many people including the public."

After five stents were placed in his heart, Herder is back to work and says he is feeling fine.

"To the three who first stepped in and all those who helped, from the bottom of my heart, thank you," says Herder.
Contact:
Danielle Hutchison, Director of Marketing and Programs
dhutchison@sevymca.org, 805-497-9081 x102