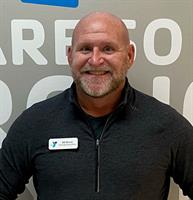 William (Bill) Blunck has been named the Chief Operating Officer at the Southeast Ventura County YMCA.

Blunck has a long history in the recreation, fitness, and nonprofit field beginning as a lifeguard/swim lesson instructor at the age of 16 in Iowa. Other nonprofit roles include a 13-year career with the YMCA of Greater Kansas City where he served as Aquatics Director, Senior Membership Director, Membership Information Director and Executive Director. He was also on launch teams for the opening of five YMCAs during his time in Kansas City. Most recently, he was Director of Trail Point Aquatics & Wellness at Des Moines Area Community College. He led the opening of its 100,000 square foot recreation/student center.

"We are very fortunate to have Bill on our YMCA team," says Ronnie Stone, CEO/President of the Southeast Ventura County YMCA. "His knowledge, experience and his dedication to the community he serves are unparalleled."

"I am beyond excited for the opportunity to serve as the COO for the Southeast Ventura County YMCA," says Blunck. "I cannot wait to work in each of our communities to build and grow greatness."

For more about the Southeast Ventura County YMCA, go to https://www.sevymca.org.